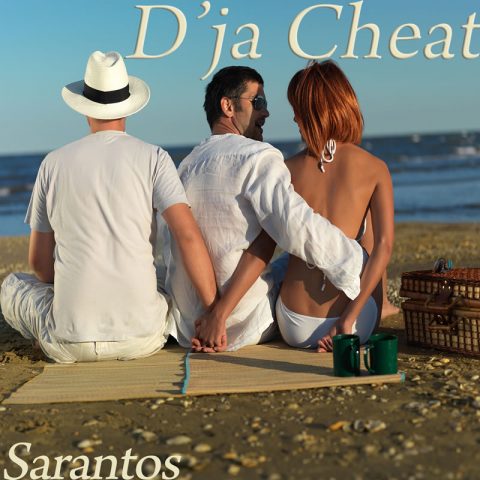 I always felt so damn wronged Acted like a rabid dog
Stumbled like a drunken man Sobered slowly, I walked then I ran

Obsessed day and night and thru and thru My worse nightmare, did it come true?

So you cheated on me
Well who cares?
I do dammit and I can’t stop thinking about it!

Ahhhh Ugh
I hate this

Sarantos continues releasing a new song and music video every month in 2016 as he unveils his highly anticipated 3rd album. This CD will expand on his unique signature style that merges 80s rock with modern pop rock music while continuing with edgy experimentation! Fans and fellow musicians marvel at his humble down-to-earth demeanor, his dedication to his mission and the wealth of free content that continues to drop every month along with his contributions to charity!

His 1st solo album dropped in 2014 and Sarantos has released 2 new CDs every year since. He has tackled almost every genre imaginable ranging from pop, rock, jazz, rap and country. Fans continue to bask in his passion and creativity while enjoying surprises such as a Christmas album, solo instrumental CD, bonus covers, a steady stream of radio interviews and much more. Fans wonder what’s next.

Since 2014, Sarantos has won over 29 awards with Akademia LA Music,

Even without ever using a professional music studio, label, ad agency or radio promoters, his songs “Dreamer” & “What If I Never See You Again” have spent many months in the top 200 on the majors list in the US for radio airplay according to the Digital Radio Tracker Top 200 charts. On the independent charts, Sarantos has hit the top 10.

Sarantos prides himself on not releasing robotic music. In a live concert or on the radio, Sarantos music is authentic and real. It has imperfections like genuine human music should. He is always trying to sound different musically, lyrically and vocally. He does not want fans or critics to get bored with his efforts. Despite the momentum and continued traction, Sarantos still has not turned a profit since he gives away all of his songs, videos and books for free and of course, everything costs money to make. That said, Sarantos donated $2,000 anyway in 2015 to the various charities that were picked by fans for his songs. It’s not much but every little bit counts. Hopefully this number will continue to increase as his journey continues.

Sarantos currently has over 1.3M Social Media followers and has been rated #1 on Reverbnation in the pop genre worldwide at various times.  Sarantos performed at the Toronto Music Festival in May to a sold out live audience. Sarantos music receives rave reviews and he relishes this chance to pursue his life-long dream.

With new hit tunes waiting to be released every single month until the day he dies, Sarantos music screams success and stimulates an overdue conversation in the always-changing music industry. Sarantos loyal fans continue to tune in daily for his heartfelt social media posts. His songs are being broadcast every day on various radios stations around the globe. Sarantos continues to do weekly interviews and fans can listen in on some at his YouTube channel. Please forget his funny, sarcastic, witty and genuine music videos that leave his fans not knowing what to expect next. Sarantos never sticks to just one theme or one emotion. He doesn’t want fans to get bored with lame music videos that are common in the industry. What will he try next?

Sarantos has been writing lyrics since 4th grade and is passionate about the words he puts to the music. Music was always in his blood. Music was always a passion and much more than a hobby. Sarantos has written over 2,600 songs! He always had an abnormal fascination with music, much to the expense of a normal personality development. At least Sarantos finds humor while being candid about “making more mistakes than anyone I know!”

Having undergone several personal challenges starting with his father passing away in 2010 after a long hard-fought battle with lung cancer, dealing with personal health issues like asthma, chronic allergies, eosinophilic esophagitis with a stricture the size of a straw, food allergies to almost everything, going thru life’s ups & downs, the timing was finally right to start pursuing his lifelong dream in 2014. And so it began. Sarantos main motivation remains, however, to raise money for charity.