Another great new song by Sarantos – “You (just) Don't Have It.” The charity for this one is Girl Effect.

editor October 6, 2015 Sponsors Comments Off on Another great new song by Sarantos – “You (just) Don't Have It.” The charity for this one is Girl Effect. 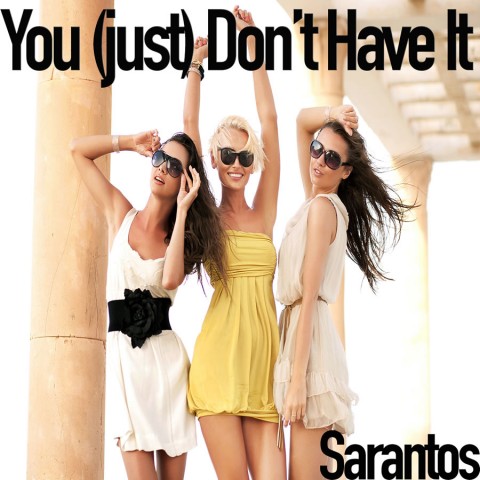 Sarantos has continued releasing a new song and music video every month in 2015 as he unveils his eagerly anticipated sophomore album. This collection zeroes in on his unique signature style continuing to merge 80s rock with modern pop rock music. The evolution of Sarantos musical style is readily apparent to fans and seasoned musicians alike.

His 1st solo album dropped on November 18th 2014 and the diversity was amazing as Sarantos tackled almost every genre imaginable ranging from pop, rock, jazz, rap and country. As a complete surprise to his fans, one week later on Black Friday Sarantos also released a Christmas album. This was a wonderful collection of 4 brand new original Christmas songs, 10 covers of Christmas classics and 9 inspirational Christmas short stories. Families will enjoy listening to this CD every Christmas season…

Sarantos won the Akademia LA Music Awards in 2015 for Best Song (What If I Never See You Again), Best Rock Song (Easy To Believe), Best Rock Music Video (We Accept The Love We Think We Deserve), Best Singer/Songwriter Song (A Mission Of Heart, I Sing), Best Pop Song (I Sing) & Best Pop Rock Album (Not Where I Wanna Be).

Even without a label or radio promoters, Sarantos song “What If I Never See You Again” has been in the top 200 on the majors list in the US for radio airplay according to the Digital Radio Tracker Top 200 charts. On the independent charts, Sarantos is still in the top 10. He’s been on both these lists since early April.

With new hit tunes waiting to be released every single month until the day he dies, Sarantos music screams success and stimulates an overdue conversation in the always changing music industry. Sarantos loyal music fans continue to show their support by proudly showing off Sarantos merchandise and staying tuned into Sarantos daily down-to-earth and very real social media revelations. His songs are being broadcast every day on various radios stations around the world. Sarantos continues to do interviews around the world every single week and fans can listen in to some of them on his YouTube page. Let’s not forget his funny, sarcastic, witty and genuinely real music videos that leave his fans not knowing what to expect next. Sarantos never sticks to just one theme or one emotion. He doesn’t want fans to get bored!

Sarantos has always been inclined to help people in need and is proud to launch his music as a way to donate a portion of proceeds to charity, hopefully inspiring other artists to do the same. Just a few of the charities chosen so far include American Cancer Society, American Lung Association, Make-a-Wish Foundation, American Heart Association, St Jude’s, American Red Cross, Salvaton Army, Children’s Hospital of Chicago, Feed The Starving Children, National Coalition Against Domestic Violence, The National Center For Fathering and many more.