“The Silence Doesn’t Bother Me.” The charity for this one is the National Ovarian Cancer Coalition. 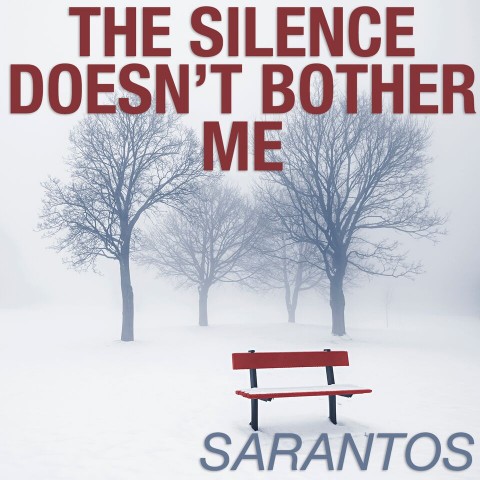 Silence is all around, sometimes it’s present despite being in a crowded room. The song is about being comfortable in the silence of your art not being well-received.

Sarantos continues releasing a new song and music video every month in 2016 as he unveils his highly anticipated 3rd album. This CD will expand on his unique signature style that merges 80s rock with modern pop rock music. Fans and fellow musicians marvel at his humble down-to-earth demeanor, his dedication to his mission and the wealth of free content that continues to drop every month!

His 1st solo album dropped on November 18th 2014 and the diversity was amazing as Sarantos tackled almost every genre imaginable ranging from pop, rock, jazz, rap and country. As a complete surprise to his fans, one week later on Black Friday Sarantos also released a Christmas album. This was a wonderful collection of 4 brand new original Christmas songs, 10 covers of Christmas classics and 9 inspirational Christmas short stories. Families will enjoy listening to this CD every Christmas season. After his sophmore album in 2015, there was again another bombshell on Black Friday as Sarantos released a solo instrumental CD along with a bonus cover for the holidays. Fans wonder if there will be another surprise waiting for them at the end of 2016??

Sarantos won the Akademia LA Music Awards in 2015 for Best Song (What If I Never See You Again), Best Rock Song (Easy To Believe), Best Rock Ballad (The Veteran), Best Rock Music Video (We Accept The Love We Think We Deserve), Best Singer/Songwriter Song (A Mission Of Heart, I Sing), Best Pop Song (I Sing) & Best Pop Rock Album (Not Where I Wanna Be).

Sarantos prides himself on not releasing robotic music. In concert or on the radio, Sarantos music is authentic and real. It has imperfections like genuine human music should. Despite the momentum and continued traction, Sarantos still have not turned a profit since he gives away all of his songs, videos and books for free and of course, everything costs money to make. That said, Sarantos donated $2,000 anyway in 2015 to the various charities that were picked for songs released so far. It’s not much but every little bit counts. Hopefully this number will continue to increase as his journey continues.

With new hit tunes waiting to be released every single month until the day he dies, Sarantos music screams success and stimulates an overdue conversation in the always-changing music industry. Sarantos loyal music fans continue to show their support by proudly showing off Sarantos merchandise and staying tuned into Sarantos daily for his heartfelt social media posts. His songs are being broadcast every day on various radios stations around the globe. Sarantos continues to do weekly interviews internationally and fans can listen in to some of them on his YouTube page. Let’s not forget his funny, sarcastic, witty and genuinely real music videos that leave his fans not knowing what to expect next. Sarantos never sticks to just one theme or one emotion. He doesn’t want fans to get bored! What will he try next?

Sarantos has always been inclined to help people in need and is proud to release his music as a way to donate a portion of proceeds to charity, hopefully inspiring other artists to do the same. His fans help him choose the charity each month. Just a few of the charities chosen so far include American Cancer Society, American Lung Association, Make-a-Wish Foundation, American Heart Association, St Jude’s, American Red Cross, Salvaton Army, Children’s Hospital of Chicago, Feed The Starving Children and many more.  Despite the momentum and continued traction, Sarantos still has not turned a profit since he gives away all his songs, videos and books for free and everything costs money to make. That said, Sarantos decided to donate $2,000 anyway to the various charities in 2015. It’s not much but every little bit counts. Sarantos hopes that this number will continue to increase as the journey continues.